ALL Markets CLOSED this week - Summer CFM Inside the PS Pavilion opens on 6/12! 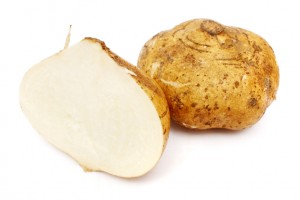 This week’s Fresh Pick of the Week, Jicama, also known as Mexican Yam, or Mexican Turnip, is a native Mexican vine that is actually part of the bean family. The edible part of the plant, (and the part we refer to as Jicama), is the plant’s starchy tuberous root.

The flesh of the Jicama root is creamy white with a crisp texture that resembles a raw potato or pear. The flavor is sweet and somewhat starchy, reminiscent of some apples, pears, potatoes and even raw beans. Jicama is quite popular in Mexican cuisine, as well as many Asian cuisines. Spaniards discovered it in Mexico, then spread cultivation of the Jicama from Mexico  to the Philippines. From there it spread to China and other parts of Southeast Asia.

DID YOU KNOW: In contrast to the edible root, the remainder of the Jicama plant is very poisonous. Its seeds naturally contain the toxin rotenone, which is used as a broad-spectrum insecticide, piscicide, and pesticide.