The Certified Farmers' Markets are OPEN in Palm Springs, LaQuinta and Palm Desert, Rain or Shine! 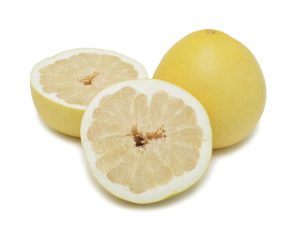 Pummelos are this week’s Fresh Pick of the Week from the valley’s three Certified Farmers’ Markets. Pummelos are natural (non-hybrid) citrus fruits that are similar in appearance to the grapefruit. Pummelos taste like a sweet, mild grapefruit, although they are much larger than the grapefruit, and have a much thicker rind. They have none, or very little, of the common grapefruit’s bitterness. The enveloping membranous material around the segments, however, is bitter, considered inedible, and thus is usually discarded. Pummelos are native to Southeast Asia, although they can be grown successfully in any climate that supports other citrus fruit varieties.

Did you know: Pummelos are one of the four original citrus species (the others being citron, mandarin, and papeda), from which the rest of cultivated citrus hybridized. In particular, the common orange and the grapefruit are assumed to be natural occurring hybrids between the pomelo and the mandarin, with the pomelo providing the bigger size and greater firmness.